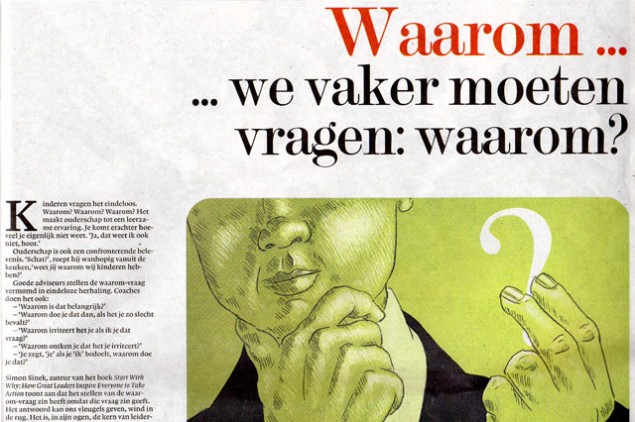 Managers quickly move on to the what and how of it all.
Leaders start by asking a question: why? And another: Why?
Nature does not hurry, yet everything is accomplished, as the Tao teaches.

Children ask it over and over. Why? Why? Why? It makes parenting a learning experience. You find out how much you don’t actually know. ‘Yeah, I don’t know the answer to that one either.’
Parenting is also a confronting experience. ‘Honey?’ he calls desperately from the kitchen, ‘Do you know why we have children?’
Good consultants ask that same question over and over, repeated ad infinitum. Coaches do too:
– ‘Why is that important?’
– ‘Why are you doing it if you don’t like how it turns out?’
– ‘Why do you find it irritating that I ask that question?’
– ‘Why are you denying that you’re irritated?’
– ‘You say “you” when you mean “I”. Why are you doing that?’

Simon Sinek, author of the book Start with Why: How Great Leaders Inspire Everyone to Take Action shows that it makes sense to ask that ‘why’ question because the question itself creates meaning. The answer can give us wings, carry us forward. It is, in his view, the essence of leadership.
Effective leaders start by asking why. Only then do they move on to the how, ultimately embarking on the what. Managers opt for the practical sequence and start with the what, getting down to brass tacks from the start.
Nature does not hurry, yet everything is accomplished, as the Tao teaches. That nugget of wisdom is lost on many managers. They’d rather get things done than sit and think. Let’s get moving. And what happens then? It’s easy to guess: recalcitrant employees pepper them with questions from all sides. It’s a free-for-all. ‘But why?’ and “Then how?’ In this heavy crossfire, ill-conceived proposals are immediately on the defensive. They get tangled in the undergrowth of what rapidly becomes ‘an issue’. And that’s it; the fun’s over.
Apple CEO Steve Jobs was a master of the ‘why’ question. He explained it by referring to his Zen training and the time he spent in ashrams in India. Maybe Bill Gates over at Microsoft should have done the same, Steve Jobs said snidely. It might have saved us a ton of bad software and ugly products.
The route that doesn’t speed down the highway as fast as possible isn’t far off the mark.
– ‘Why are we doing that?’
– ‘Why do we want that?’

The higher purpose brings the lower goal within our grasp. The goal is supported by the intention, and that can be revealed by asking ‘why’. It gives space and creates a sense of direction. ‘Why’ invites a flood of answers, which in turn lead back to why. In essence, it requires nothing more than child-like candor.
It is a quest to discover what drives us. It’s the same as what Socrates did. He took the time and asked question after question until the meaning became apparent. No Sophist was safe from his persistent inquiries. Reflection, asking yourself those questions, means standing still to achieve deep contemplation, in order to move full speed ahead afterwards. How can you find answers if you don’t ask the questions?
Philosophy may well be the most practical school of science in the knowledge economy. A good question overshadows a hundred answers, as the brilliant interviewer Ischa Meijer once said. He had been able to sharpen his talented wit on Sal Tas, his psychiatrist.
Questions can take on brilliant forms. As Dutch comedian Hans Teeuwen said, ‘What if this question isn’t hypothetical?’
In his last show, Dutch cabaret artist Herman van Veen tells the audience about his grandson, who proudly presents a drawing to him.
‘What is it?’ Herman asks.
‘It’s a rabbit, Grandpa.’
‘But why doesn’t it have long ears?’
‘Those are still in my pencil, Grandpa.’

I had to think of Michelangelo, who said his art was nothing more than freeing the form from within the stone. The ‘why’ question contains its own answer; the question sets the answer free.
Asking why confers meaning, offers sense, and sets us in motion – especially when our first reflex is to answer, ‘I don’t know.’
Why do we see the world in color?
Why is the grass green and the sky blue?

‘Why is there something rather than nothing?’ Martin Heidegger, derived from Gottfried Wilhelm Leibniz
‘Why wouldn’t truth be stranger than fiction?’ Mark Twain
[actual quote: ‘It’s no wonder that truth is stranger than fiction. Fiction has to make sense.’]
‘Why was I born with such contemporaries?’ Oscar Wilde
‘Why can’t I just eat my waffle?’ Barack Obama
‘Why is propaganda so much more successful when it stirs up hatred than when it tries to stir up friendly feeling?’ Bertrand Russell
‘Why are our days numbered and not, say, lettered?’ Woody Allen
‘Why should we take advice on sex from the pope?’ G.B. Shaw
This is the first installment in a series of contemplations based on a why question. In this feature, seemingly simple questions set out in search of inspiring answers. Suggestions for why questions can be mailed to mensen@nrc.nl.

This entry was posted in In het nederlands.