Enterprise is better than managing in the current climate 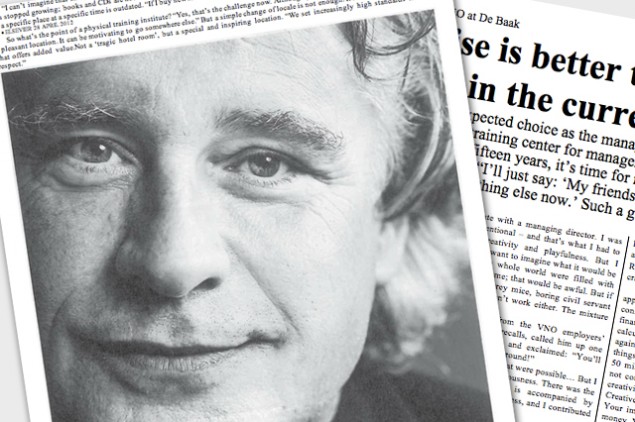 Harry Starren was an unexpected choice as the managing director of De Baak, the proper, well-respected training center for managers. The center blossomed under his leadership. After fifteen years, it’s time for new horizons. He has often imagined his farewell. “I’ll just say: ‘My friends, I’m going to go do something else now.’ Such a glorious moment.”

After fifteen years, Harry Starren (57) is saying goodbye to De Baak Management Center VNO-NCW, the well-known training center with branch locations in Noordwijk and Driebergen. He considers his farewell to be inevitable; although it’s sad to leave, it isn’t a terrible shame. “I am giving up a great deal of certainty and permanence, but those things come with their own limitations too.”

It’s a matter of different people, different times. Starren – tanned, slightly longer grey hair and a thin beaded bracelet – prefers to talk in abstract concepts rather than concrete terms. Sometimes it takes a moment to grasp what he means, and sometimes it’s brilliant. He’s certainly not your average, everyday managing director.

What will he be doing? “I wanted to figure out what I want first. Four things are important: listening and reading, writing and speaking. I’ll find ways to do that. I’d like to study more and read more thoroughly. That became an instrumental influence in recent years. I spent a few years studying history a while ago, and that interest is resurfacing. You hear that a lot. The things you started out with start tickling your imagination again, and I enjoy going full circle.”
Starren, who has degrees in political science and public administration, was a surprising choice in 1998 to head De Baak, the proper, well-respected center affiliated with employers’ associations. His work experience included scientific researcher, university lecturer and a job in post-graduate education in business and public administration in Utrecht.
“I wasn’t considered a potential figurehead, although I did grow into that role. I didn’t fit in the line-up; my hair was too long and I often didn’t wear a tie. They took a chance, and I appreciated that bravery. I didn’t have the propriety you’d associate with a managing director. I was unconventional – and that’s what I had to offer: creativity and playfulness. But I wouldn’t want to imagine what it would be like if the whole world were filled with people like me; that would be awful. But if they’re all grey mice, boring civil servant types, it doesn’t work either. The mixture is important.”
Someone from the VNO employers’ association, he recalls, called him up one time, back then, and exclaimed: “You’ll turn it into a playground!”
“I thought: if that were possible… But I understood his nervousness. There was the idea that authority is accompanied by gravity, with seriousness, and I contributed other concepts. Playfulness and creativity helped the training center flourish. It gained renown and popularity. Under Starren’s leadership, turnover rose from 6 million to 30 million euros annually. “That was never my goal – and it went so well because that was not the most important focus. As soon as you really start trying to make that one thing happen, it becomes less natural. Things work best when you’re relaxed; that holds true in sports and in business. You need to do things from a relaxed awareness of your objective. Jelle Zijlstra, president of the DNB national bank, once said: ‘You can achieve anything when you’re relaxed.’ Rediscovering that is a form of craftsmanship.”
No matter how unconventional his approach appears, Starren is financially conservative. He has never listened to financial experts who offered him calculations of the capital he could borrow against the business and the estate when things were going well. “I could have had 50 million euros, no questions asked. I’m not comfortable with that. Innovation and creativity, absolutely, but not in finances. Creative bookkeepers make me nervous. Your imagination shouldn’t be directed at money. You have to arrange financing as if everything could go wrong at any moment.”
Harry Starren: “But I wouldn’t want to imagine what it would be like if the whole world were filled with people like me; that would be awful.”
It’s a time of crisis, but that isn’t necessarily a bad thing. “We’ve had a long period of growth. Looking at it fairly, we’re now entitled to a downward trend that lasts just as long.” De Baak has been affected by it. Starren summarizes the situation. ‘Pressure on prices. Spending per person went down at the companies that we served. Difficult decision-making processes, late decisions, casual cancellations; it was difficult to pin anything down.”
Maybe the whole concept of employees taking a course could use innovation? Starren has no doubt. He compares it to the evening news. “Who still sits down at 8 PM to watch the evening news? Fewer people are making the effort; they watch it online in the reruns, or go to a news website. That whole pattern has changed. The training programs give me the same feeling. Showing up when someone else says you should, stopping when they say you’re done; it’s very docile.
“I can’t imagine that this sector will remain unaffected by the changes you see happening all over the place. Newspaper circulation has stopped growing; books and CDs are not doing well. Training programs are in the same category of knowledge acquisition.’ Going to a specific place at a specific time is outdated. “If I buy new shoes, I want to wear them now, not wait until 16 September.”
28 ■ ELSEVIER 28 APRIL 2012
So what’s the point of a physical training institute? “Yes, that’s the challenge now. Although you do see that people enjoy going to a pleasant location. It can be motivating to go somewhere else.” But a simple change of locale is not enough. It has to be a special place that offers added value.
Not a ‘tragic hotel room’, but a special and inspiring location. “We set increasingly high standards in that respect.”

29 – ELSEVIER 28 APRIL 2012
It does mean that major changes need to be made at De Baak, and Starren wondered whether he was the right man to make it happen. “I’ve always said that the company should be led by someone in their forties. I started to see my own age more clearly and asked myself whether I had the stamina to go through another transformation. Because the ship really needs to be steered in a different direction. I’ve always destroyed things that I’d done in the past, but this demands a truly drastic approach. I’ve been doing it for a very long time; that was also a factor. And I’m 57, so I thought there might still be time to arrange another round for myself.
Quite a few managers have been trained at De Baak. Still, Starren says that the Netherlands is suffering from overmanagement. To some extent, leaving was an ideological principle for him. “Now, as a result of the crisis, we are taking a far more critical look at managers, and rightly so. Just landing at Schiphol makes it amply clear what plagues this country. Everything is neat and tidy; everything is under control.
“I say: if you want to achieve growth, you have to let things get out of hand. There’s more room to dare to let it happen in a different financial climate. Budget spending isn’t nearly as festive when there’s plenty of money available to spend. I sometimes think that our solutions have become the problem. We’re collapsing under the weight of what we’re organizing. There are simply too many managers – and yes, I helped train them.
“I doubt whether the current emphasis on management and leadership is advisable. Enterprise may be better right now. Going out there, doing things and seeing what happens.”
That’s what Starren himself will be doing now, although we shouldn’t make it sound more daring than it is; he has arranged for upcoming projects and a financial buffer. And he has always been a proponent of daring to leave the herd.
“Of course I’ve also asked myself whether this is the right time to get out. But it’s better to trust yourself and set your own pace than to constantly negotiate every step. After fifteen years, I was fairly tired of that.

“There are two ways to make it through turbulent times. You can hold onto the wharf with all of your strength, or let go completely and let the current carry you away. I’m not going to sink into silence; I’ve started my own company. It’s not entirely a leap in the deep, dark sea.”
Leaving can also be a liberating experience. “I chose to leave, but it’s also a fantasy of mine. I’ve regularly imagined handing in my notice. What it would be like to do it, how it would happen. That you think: I’m going to say it now. I’ll just say: ‘Friends, I think I’m going to go do something completely different.’ Such a glorious moment.”

This entry was posted in Interviews.