See the things that are not there 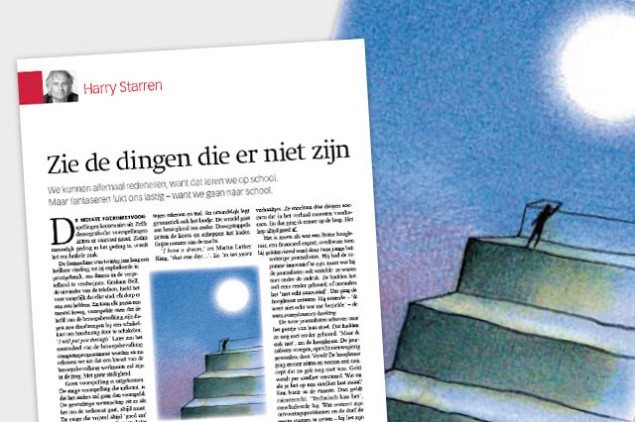 We can all reason, because we learn that at school. But we have trouble fantasizing – because we go to school.

Most predictions do not come true. And even demographic predictions are invariably way off. As soon as human behavior enters the equation, it becomes a tricky problem.

No prediction has come true. The only prediction that has come true is that it will be different than predicted. When it comes to the future, weighty science is always way off. The only one who was almost always “right on target” was a literary man, a dreamer, a visionary: Jules Verne. He let his imagination run wild and took a trip to the moon.

Vision is what appears to be true in retrospect, Shell senior executive Gerrit Wagner once said. Until that time, it is an illusion waiting for realization. Einstein called imaginative power more important than reason. Imagination, the ability to visualize something: fantasize, tell tales, lie! To take an advance on the future.

The educational theorist Ken Robinson gives school the blame. We take the fantasy out of the child and teach it to be realistic. The artistic subjects lose out to math and language. And ultimately gymnastics also gets the short end of the stick. The world loses out to neatness. Colorless people set the course and establish the framework. Lackluster people have the power.

“I have a dream,” Martin Luther King said, “that one day….” And “in ten years from now,” John Fitzgerald Kennedy said, “we will put a man on the moon.” They saw something that was not there. Visionaries.

Fantasy is to vision as creativity is to innovation. Fantasizing is seeing things that are not yet there. Achieving fantasies is being visionary – appearing to be. Not putting up with reality.

Fantasizing is telling stories, since the mind has to drift, as the poet Johnny van Doorn already knew. You have to take the time for it. Fatherhood is what helped me. I never read to my children, but invented stories. They could name three things that had to appear in the story. And then I ran with it. It always had a good ending.

It is something like what happened to a British professor, a financial expert, when he was interviewed by two young know-it-all journalists. He had the reputation of being innovative, but whatever he told the journalists: they were not impressed. They had already heard it before, or said it was “not really innovative.” That began to irritate the professor. He mentioned – “I do not know what possessed me” – the term interplanetary banking.

The two journalists shifted to the edge of their chairs. They had not heard that before. “But I haven’t either,” the professor said. The journalists kept asking, their curiosity was aroused. Explain! The professor took a seat and invented a concept that was not that crazy. Money will be sent by satellite. What happens if you leave a satellite in space? A bank in space. Then space law applies. “It is technically possible,” he concluded. What remains is implementation problems and the daring to take the first steps – he lowered his voice. “A new development that will have major consequences…”

“Since that discussion I have been known as an expert in the field of interplanetary banking. I do not know a lot about it, but since it involves a new field, I am the one who knows the most. I also give lectures on it. I’m in a fantastic field.”