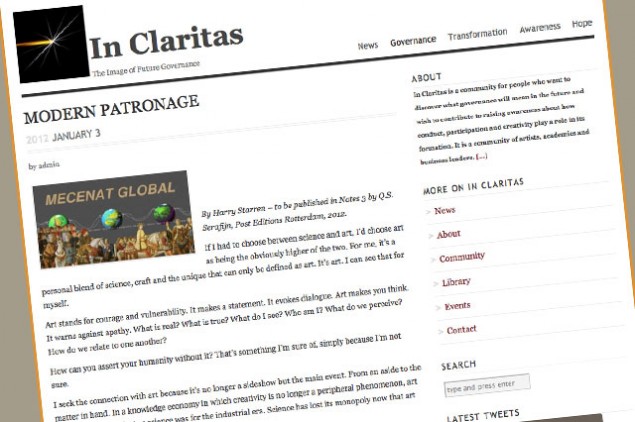 If I had to choose between science and art, I’d choose art as being the obviously higher of the two. For me, it’s a personal blend of science, craft and the unique that can only be defined as art. It’s art. I can see that for myself.

Art stands for courage and vulnerability. It makes a statement. It evokes dialogue. Art makes you think. It warns against apathy. What is real? What is true? What do I see? Who am I? What do we perceive? How do we relate to one another?

How can you assert your humanity without it? That’s something I’m sure of, simply because I’m not sure.I seek the connection with art because it’s no longer a sideshow but the main event. From an aside to the matter in hand. In a knowledge economy in which creativity is no longer a peripheral phenomenon, art is the pure source, just as science was for the industrial era. Science has lost its monopoly now that art has set it free. Maybe it’s on its way back.

The Renaissance ideal in which the artist was a researcher, craftsman and inventor – with Leonardo Da Vinci as the archetypal example – made a connection with a secular, enlightened patronage. It was about commissions.

This patronage aspired to an image of power and glory. Homage was first directed to God, incidentally to the patron himself, and more and more often to society. We were leaving traces behind, grooves on the rocks.

Modern patronage also has something of wiedergutmachung about it. Behind it, there’s a yearning to strengthen society and, at the same time, to access it. The gates of paradise can be found on earth. Patronage enters through the main gates, not through the back door.

In my role as director of De Baak, I have never felt myself to be a patron. Although as a citizen, I foster this desire and I have tentatively inquired about the fiscal consequences of participating in the Concertgebouw.

As director of De Baak, I believe that art is a core activity. A great deal of attention is devoted in management to analytical capacities that are usually well developed already. What’s lacking are synthetic capacities: the ability to bring about coherent, meaningful entities. That’s when what you need is art. If you want to analyse love, you can easily spend months at it. Four lines of fine poetry can lead to the same thing, actually more, but then of a different nature. Synthesis.

Anyone reading policy documents and strategic memorandums knows that the classics are missing here. In this hostile use of language which is stripped of any meaning and significance, and which we call ‘professional’, we can quickly recognise the chill of a meagre existence. We don’t know any better. Until…

We suspect that things could be different. Art makes us sure of it.

I bought Cobra when it was still affordable and not a cliché. The power of the artist to rediscover the spontaneity of the child and to express this. A child’s drawing made by an adult is art. There can be no mistake about it. ‘Disarming’ often comes to mind. And cheerfulness. Some would say happiness.

As far as the production of art goes, we’re doing well. In a world of yuppies, art as a way to spend your time is gaining social prestige. And so it should. Anyone standing at the top of Maslow’s pyramid should enjoy the view.

With the role of the state increasing in our society – something which has imperceptibly been set in motion and to which much of government is committed – art is being swept along in the flow. When it comes to art education, this has been established twice over. For the temples – the theaters and museums – accommodation subsidies have been created. Funding has also been released for prizes and projects. The result is a construct of institutions and mandarins. Good people whose company I enjoy. The opportunity for an interesting conversation is much higher than among business people, although there’s plenty to laugh about in either circle.

So if production is no problem, what is? (‘No problem’ is not an option here. If it were, I wouldn’t have anything to say, and I would have had to keep quiet. Too late, said the fool)

I’m almost afraid to say it, but I suspect it’s the perception of art. Art is being co-created by means of its perception. Its perception is essential: a creative force. Nothing exists that is not perceived.

Modern patronage should direct itself to how art is being perceived, because a marriage is not celebrated until it has been consummated. Esse est percipi.

Being is being perceived, to connect patronage directly with its classical origins.

This is what modern patronage should be focusing on. We’re heading towards prescribing and setting up norms. Not on what is happening but that it is happening. Or, to put it as [the author] Gerard Reve said: ‘it was seen, it did not go by unnoticed’.

Patronage is often confused with money. Patronage initiated this in the first place. Because money is our obsession, but it’s not the problem. The obsession is the problem. From left to right. Shortages of every kind are everywhere you look. Our view of the world has become economized. We know what Oscar Wilde meant by ‘A man who knows the price of everything and the value of nothing’.

We yearn for a valuable world. Yet despite this, we colour it cold and grey. We’d rather be smart than wise.

Basically, it’s clear: theater enhances my language skills, stand-up comedy improves my humor, exhibitions sharpen my visual perception, literature increases my empathy, music makes me hear better. And all of them help me relax. And equip me better for life.

In looking for magical moments, we become surrounded by them. The art of seeing, having an eye for it. Seeing it.

Nijhof said, ‘Just read it: what is written is not what you see’.

By Harry Starren – to be published in Notes 3 by Q.S. Serafijn, Post Editions Rotterdam, 2012.

This entry was posted in In Claritas.